Duo with the great Gato Leiras from Buenos Aires.
These days we worked with an armada of CD players and analog effects units. Simultaneously Sonja Bender reacted in realtime via a midi keyboard using video footage samples. watch video here.
I still have the impression to watch a movie when I hear it, something between Kubrik and Tarkowski…
Best heard with headphones in public. © 2002 CD released on 2-13 music (sold out) 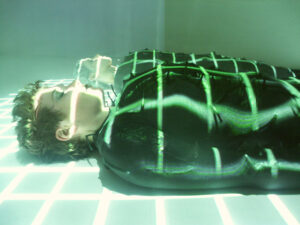 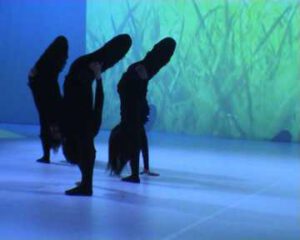 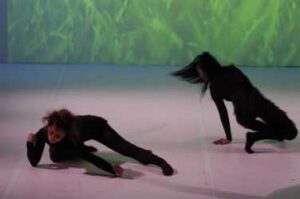 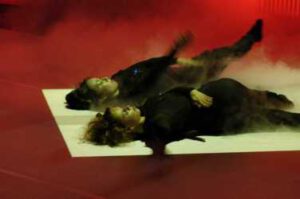 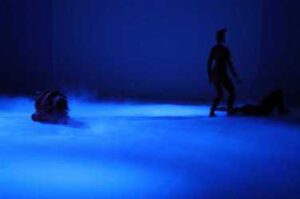 2:13 music is an improvisers’ collective run from London by John Bissett with outposts in Athens and Berlin. On “Urbano Mistica Amplitude” Michael Renkel forsakes his acoustic guitar and is joined on samplers and effects by Berlin-based Argentinian Gato Leiras. Whether the three (untitled) tracks on offer are fully or partially improvised is hard to determine, but they are well-crafted and impressive demonstrations of what computers can do in the hands of sensitive musicians. The music has more in common with leftfield electronica practitioners such as Leafcutter John and Pimmon than it does with the stripped-down post-industrial minimalism of the Berlin-based Phosphor collective, in which Renkel plays with, amongst others, Axel Dörner, Annette Krebs and Andrea Neumann. The blips, glitches and tangential references to techno belong to the city (hence “Urbano”) as does the blurred traffic photo that forms the album cover, but the overall effect is satisfyingly spacious and nebulous (hence the “Mistica”).
Dan Warburton All Music Guide

Three long tracks performed live – collaborations between Renkel and Gato Leiras from Buenos Aires. The live recording is an important element to this exciting release; the listener is invited to take part in a form of “instant composition” , which has propably been the dream of all improvising and free musicians since AMM onwards. A much busier and intensive set than the CD above, including bundles of samples, live processing and continually reinvented electric gurglery, whizzmation, and bloopage. The voice samples are particularly juicy ; the vocoder has never been used with such imagination. It’s like being in the midst of a crowd of babbling aliens, their tongues stretched, slowed down and distorted, all bubbling like melted cheese above a chaotic muddle of noisy rubble. Urbano Mistica Amplitude is a form of electronic crowd control; onla on occasion does it veer towards wackiness, as though the two heads of the collaborators had grown thick with the very insanity they are attempting to reproduce in music
Sound Projector Ed Pinsent

This website uses cookies to improve your experience while you navigate through the website. Out of these, the cookies that are categorized as necessary are stored on your browser as they are essential for the working of basic functionalities of the website. We also use third-party cookies that help us analyze and understand how you use this website. These cookies will be stored in your browser only with your consent. You also have the option to opt-out of these cookies. But opting out of some of these cookies may affect your browsing experience.
Necessary immer aktiv
Necessary cookies are absolutely essential for the website to function properly. This category only includes cookies that ensures basic functionalities and security features of the website. These cookies do not store any personal information.
Non-necessary
Any cookies that may not be particularly necessary for the website to function and is used specifically to collect user personal data via analytics, ads, other embedded contents are termed as non-necessary cookies. It is mandatory to procure user consent prior to running these cookies on your website.
SPEICHERN & AKZEPTIEREN